The movie is a post-apocalyptic horror/science fiction film. the setting is in a near post apocalyptic future where a biological warfare program goes wrong, and turns most of humanity to mindless, murderous creatures (hence forth – “infected”). There are five characters, which are still uninfected, trying to survive constant attacks by the infected. each one of them represents in some way a different aspect of human existence, a different world-view, but most important, a different moral view about the world and his/her place in it – The Colonel – A professional soldier. represents the political-military-economic establishment, which sees life as a constant violent struggle for power and resources. The Doctor – Represents a commitment to love, justice and non-violent struggle against all wrong. The Wizard – A young man, an inventor and an autodidact scientist, who looks at life as a puzzle to be solved. he strives to discover, understand and invent, with no thought as to the consequences. The Daughter – A simple girl with simple ambitions – sailing through life enjoying every comfort, while ignoring or unaware of bigger and more profound issues. The Mouser – A murderer and rapist, evil in the most banal aspect of the word. The plot takes place during their last six days. all along, as the characters evolve, they listen to a daily radio program dealing with the extinction of the dinosaurs, finding correlating themes to their own situation. as the protagonists move and try to survive, and as their world views and correlations to the situation are gradually reveled, the following themes are explored: the essence of evil, the boundaries of moral responsibility, species (and humankind) extinction, love, grace, euthanasia and more.

In the great tradition of Hsu Tseng Hung’s The Silver Fox and Chang cheh’s Lengend of the Fox comes this exciting adventure, where the only thing between all the clan…

The Scorpion King 3: Battle for Redemption

Mathayus’s sorceress-queen is killed by a pest which ravaged his kingdom until it fell. Feeling guilty and a failure, the Akkadian resumed the life of mercenary. He’s hired by Horus,…

The inside story of the planning, execution, rousing aftermath and ultimate downfall of the kidnappers of beer tycoon Alfred “Freddy” Heineken, which resulted in the largest ransom ever paid for…

The polar ice caps have melted, and the earth is covered by water. The remaining people travel the seas, in search of survival. Several different societies exist. The Mariner falls… 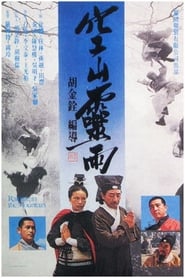 Raining in the Mountain

An esquire brings a female thief and his bailiff to search out a priceless handwritten scroll by Tripitaka, in a temple at the mountains. Meanwhile, a General and his lieutenant…

A dying Manchu Kung Fu fighter sends his three sons on a mission of revenge against the five Southern champs who defeated him a generation ago. The Manchus beat down…

Two private bankers, Alistair and Jamie, who have the world at their feet get their kicks from playing a 12 hour game of hunt, hide and seek with people from…

Alvaro is the owner of what used to be the most prominent jewelry store in Los Angeles. Now, he faces bankruptcy and the loss of an empire that took him…

The Prince and the Pauper: The Movie

A modern day telling of the Mark Twain classic, The Prince and the Pauper.

Mountain guide, Emily Wilks, is forced to lead a group of men up the perilous Devil’s Peak. But leading the group up Devil’s Peak is just a stalling tactic until…

The Chemist is a gritty action thriller about an aging assassin who is double crossed by his employer when he refuses to assassinate a woman he just met. On the…

Two cops investigating the murder of a young boy become invloved in a very secret project involving alien life. Needless to say, the authorities don’t want them to stick their…